Arnemuiden and its social context

Arnemuiden and its social context

Arnemuiden is a town in the province of Sealand on the former island of Walcheren. In 2008 it had 5358 inhabitants. Until 1997 it was an independent village with their own city counsel and mayor. After 1997 it became part of the city of Middelburg.

Arnemuiden is a town with a lot of children. In 2014 there are about 500 children under the age of 13. There are three schools in Arnemuiden for children between 4 and 12 years old. These schools all have a different religious or ideological background. In the province of Sealand a women gets an average of 1.89 children (number from 2012). In Arnemuiden most families have at least three children. Still there are concerns about the ageing of the population of Sealand. Many of the young adults are leaving the province for study and because there are better job prospects in other provinces a significant amount does not return to the province of Sealand. In Arnemuiden this is the case for a number of young people, but a lot of them have strong ties with the community and choose not to study elsewhere or to return to Arnemuiden after they graduated.

Role of the church in the community

Arnemuiden has four churches of different denominations (all Protestant) and many inhabitants are visiting churches in Middelburg or other surrounding town and cities. On Sundays almost everything in Arnemuiden is closed and its very quiet in the town. The church is not only important on Sundays, but also has a social function during the rest of the week. Most churches have al lot of activities especially during the autumn and winter. For the younger children there is Sundayschool and clubmeetings, for teenagers there is confirmation class (from12 years until about 18/19) and also club activities. For the adults there are bible study groups sometimes especially for men or women. There are also activities organized for the elder people.

Most inhabitants of Arnemuiden are member of a club or society and are doing volunteering work. There are several sport clubs (soccer, korfball, tennis, table tennis) of which some have more than 350 members. There is also a harmony orchestra, a committee that organizes the activities on Kingsday, a bird society, a pigeon society, a historical society and a scouting. There is also a society for entrepreneurs that among other things organizes several annual events like Fishery day and a Winterfair, and for the children a Chinese latern procession and activities to celebrate the very popular feast of Sint Nicholas. There are two museums in Arnemuiden, which are entirely run by volunteers. 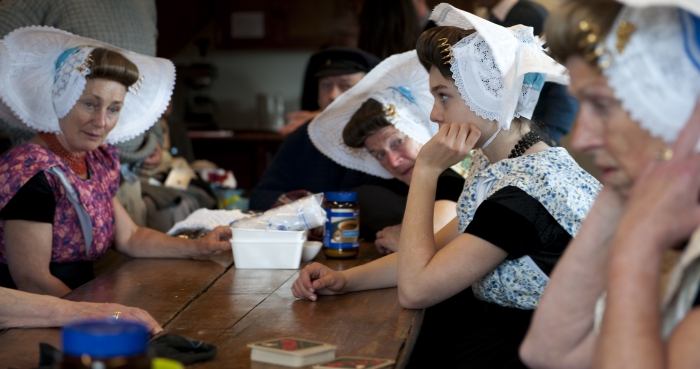 For most inhabitants of Arnemuiden family and friends are very important. There are a lot of people who help each other by taking care of each others children or by taking care of the elder or sick family members. In the Netherlands the social laws are very good so most people who can’t work have the right to financial help from the government. But people still give each other food and clothes when needed. If more structural care is needed people can also ask the church for help.

Retrieved from "http://www.coastalwiki.org/w/index.php?title=Arnemuiden_and_its_social_context&oldid=65488"
Categories:
The Coastal Wiki is hosted and developed by the Flanders Marine Institute (VLIZ) - contact: info@coastalwiki.org